Latinum, the home of the Adler Latin audio course, moved its extensive audio catalogue to Patreon on the 14th of April 2017.

Firstly - why Patreon?
Patreon allows me to offer you, for a small monthly subscription (which you are not locked in to - you can cancel at any time), access my entire back catalogue of course material.Think this is expensive? Check out my Price Comparison page.What do you get if you become a patron (subscriber) of Latinum?Every patron (subscriber) can  access and stream hundreds of hours of quality Latin audiobooks and other audio resources from the streaming catalogue, for a very low monthly subscription.
Higher reward tier patrons are offered an incredible deal - the ability to download a large catalogue of audiobooks as zip files.

Recorded in 2008, this selection  contains the mp3 files for a selection of Corderius' colloquia read in Latin-English-Latin 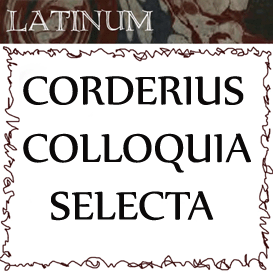 The cd also contains the Latin-only version, in two audio variations, the Willymott and Alexander editions. Copies of the pdf's of the original texts used to produce these recordings are included.
These scripted dialogues were first issued in the 1500's, and immediately became a hit - they went through a large number of editions, and were a staple of the Latin schoolroom right through to the late 1700's. A study made of the bookshelves of students who died while in college at Cambridge University ( whose possessions were recorded in the records), shows that these dialogues, and works by Erasmus, were in almost every student's personal library in the early - mid 1700's.
They only lost popularity when the rise of Nationalism and regionalism in Europe lead to less emphasis being placed on oral fluency in Latin, eventually leading to the situation today, when, for the first time since the fall of Rome, Latin as a spoken medium is in danger of extinction.
Stream or Download this on Patreon
Magister Latinum Institute hora 11:06 3 comments: Links to this post

Become a follower to be kept up to date with new releases.